Impress Her with Science

If you’ve ever seen the old ’90s classic “Weird Science,” then you’ve probably fantasized a time or two about creating your own perfect woman. Of course, reality probably set in sometime around when you were 12 or 13 years old, and by now you know that you have to meet women the old fashion way. However, don’t totally overlook science – even when on a date. Sure, you might look a little geeky, like the crew from “Big Bang Theory,” so this isn’t for everyone. But if you think she might like a little science mixed in on a date night – even something semi-cheesy — then go for it. You might be surprised at her reaction.

Try Making Your Own Lava Lamps 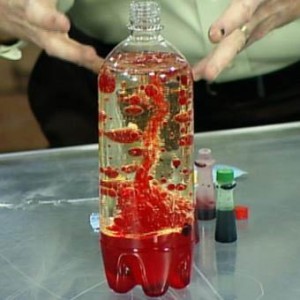 “She will be shocked to see you make a lava lamp”

Lava lamps were popular decades ago, but that doesn’t meant that they aren’t fun. After emptying a liter bottle fill it with almost all water and a little bit of vegetable oil. Let it sit a moment and add ten drops of whatever food coloring you or your lady would like. The final touch is to add a fizzing tablet (something like the kind to take for heartburn or an upset stomach) and watch the magic happen. The coloring will join up with the oil globules and the fizzy bubbles will make them rise and fall. It’s a very fun and easy science date at home.

A demonstration that the two of you can participate in is rolling a soda pop can with static electricity. All it takes is an empty can, a balloon, and hair. Rub the balloon on someone’s head and then hold it closely to the empty can without touching it. The can will start to roll and the two of you can giggle at having silly, messy hair together. If you add a small piece of tissue it will also jump onto the statically charged balloon and then fall away, like a magnet with the opposite force. 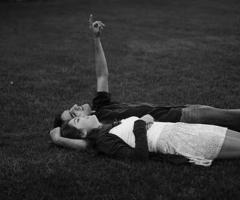 “Impress her by spotting the famous stars and planets at night”

Something a bit more romantic is to take her out and look at the stars. You might be half of a dumb ass when it comes to astronomy, but if you look up a few simple facts about the celestial bodies, then you’ll probably come off as very intelligent. Try to spot the different constellations in the sky (bonus points if you can find her astrological sign) as well as planets or shooting stars. If you do happen to own one, getting out the telescope will be very impressive. Truth be told most people have never looked through one to see the stars up close. If you don’t have one, then consider taking her to a local observatory or science center that has one for public use.

If you really aren’t into doing the science date at home, you can always go to a local science museum. They might take some travel time, but have so many different things to look at ranging from animal sciences to seemingly unreal experiments about specific subjects. It’s rarely difficult to find something to look at and the conversation shouldn’t have a chance to get boring. Most science museums also have on ground eating facilities so there’s no traveling for food in the middle of the date.