Things to Avoid Discussing on the First Date

The British Guy
argument on your first date, first date conversation, getting a second date, ruin the entire date

You know the basics for what conversations you should be having on a first date, but girls are easily offended, so how do you steer clear of any awkward situations? Saying the wrong thing can send her off on a tangent, which is not only annoying, but also means that you probably won’t be getting a second date. You want to keep your new girlfriend happy, so watch out for these four things that will make her go out of the door faster than you can blink.

Unless you want to have an argument on your first date, politics should never be discussed. Even if she says she’s okay with it, she’s really just being polite. No woman likes to hear what you think of the country’s debt problem or any other hot-button issues, and you’ll probably just wind up offending her. It’s very rare to find someone who fully agrees with your political views, so just keep it to yourself. Your date will go much smoother if you avoid mentioning anything about the government. In general, it’s a good plan to keep all conversations neutral or only slightly one-sided so that she doesn’t think you’re too opinionated. 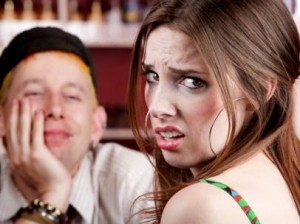 “Talking about your religion on fist date will put her off”

Whipping out your religion during the first date is worse than slapping her across the face, and she’d probably react better if you did that instead. Religious views are something very personal that you should only discuss with a girl after you’ve gotten to know her well. It’s definitely not first date conversation material. She doesn’t want to hear about how you’ve devoted your life to whomever and whatever religion you follow. Bringing it up from the start makes you seem like a religious nutcase and someone she wants to steer clear of. Make conversation about something less intimate, like the meal you’re sharing or the decor the restaurant chose.

Gossiping with your new girlfriend is a hit-or-miss tactic that should be avoided to avoid any blow-ups. Some girls are really into people-watching and general gossiping, but others are completely put off by it and think it’s disgusting to hear you speaking poorly of other people during your date. If gossip is going to happen between you two, let her start it. It’s better to wait and get her opinion of it than to risk upsetting her by running your mouth first. If you have to talk about somebody, ask what she thinks about him or her before saying anything. 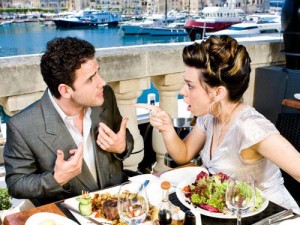 “Avoid arguments on your fist date”

A lot of people aren’t on good terms with their family, and even the mere mention of family members can set them off and ruin the entire date. Unless she brings it up, never ask about her parents, siblings, etc. You never know when she’s experienced some sort of tragic death or falling-out that she doesn’t want to talk about. Besides, talking about her family implies that you want to meet them and it makes you seem way too forward. It might also freak her out. You can feel free to discuss your family, but don’t pry about hers.